Our very own silent Monk – Buddhist rituals for Muay Thai 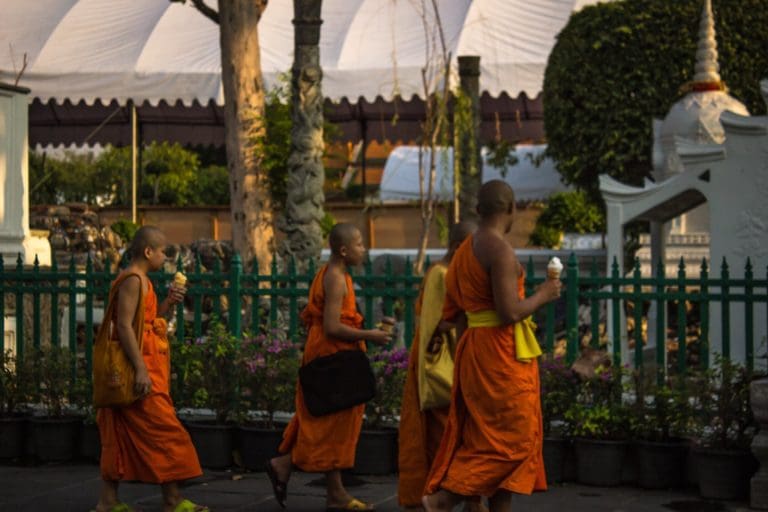 Our very own silent Monk – Buddhist rituals for Muay Thai

This monk never looks into your eyes. This is kind of unexpected from my experience. Maybe this time is the right one. I think. I suppose. Maybe. I want to be hopeful. A positive attitude is the key. Also, I’m really curious to discover more about Buddhist rituals for Muay Thai and how do they work.

A whole lot of TV preachers and motivational gurus come to my mind, the tall one, the handsome one, the ginger one, the short but strong one. I should listen to them now and then, and drop the cynical attitude beyond my whole characterization. I keep telling myself this and try to smile. The monk asks us for an offer.

Our guide for the day, Khun W., explain to us that this monk is very well known around the area and even outside it, even to the point that people from Switzerland come here to see him, he says.

Why from Switzerland, one of the smallest countries in the world, and not from somewhere else, I don’t know. However, I believe it. I want to. I keep it. It’s something. It’s enough, and I’m positive and hopeful.

Listen, do you really believe in people who don’t look into your eyes?

This time is different, this time I have another point of view, this time I want to be convinced by this. Just like a constructive, productive, valuable human being.

The Monk takes us into a little house, its inside rich with furniture made from wood, old looms hung all around, wooden benches with cartwheels and a table, plenty of small bottles and little containers. The Monk prepares something while we all kneel, always discussing with our Khun W., always in Isaan dialect so that I barely understand a word, only one or two every now and then. He then calls us, in turn, to kneel in front of him.

Firstly, P. and A. kneel in front of him. The monk attaches a needle to the tip of a small bamboo stick that is graciously decorated, then tells the guys to show their right fist and practices three or four pricks on their knuckle. He then blesses their knuckles through a prayer that I assume is said in Sanskrit.

This is supposed to protect them and carry good luck, as they are Muay Thai fighters.

I am a fighter too, but the monk and our guide Khun W., decided that I should receive a blessing for my business, rather than for sports. Such business, they decided as we entered the room, has to be a restaurant, probably because yesterday I grilled some chicken breasts at home for everyone.

Therefore, barely aware of my new life mission, I kneel down and show my right fist, only to see the monk shaking his head in disagreement, indicating at my forehead: that’s what I should be showing. I do as I’m told, the monk puts some oil on it and then one of those small gold pieces they use when making offers, right where the oil is. Then, with a cane that is the shape of a snake, he blesses me. At the end of the ritual, there’s nothing more of the small gold square melted on my forehead, and I’m ready to open my restaurant.

The monk then kindly lets us know that this same ritual costs 300 Euros for those Swiss guys who came here some time ago and that people of Bangkok pay at least 50 Euros to get the same ritual. They are sure to make it clear to us that this favor for us is big, and could even be calculated into Euros. I’m in fact very surprised by the currency they used to explain this, and I consider that they are very good in working out exchange rates.

We take our things and go back to the car. Again, I tell myself that I want to believe, and it’s going to be even easier, because now I even know the cost of Buddhist rituals for Muay Thai in Euros instead of Baht.