Love at the time of 7-11 and Tinder in Bangkok 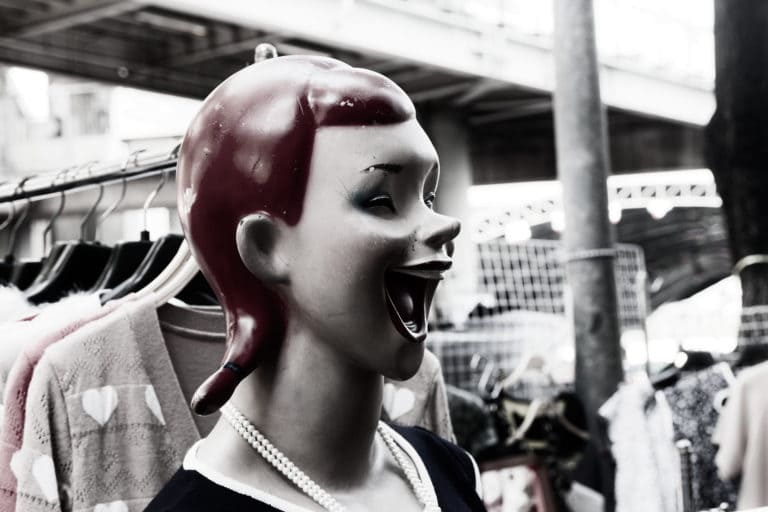 Love at the time of 7-11 and Tinder in Bangkok

The power of new media, and how they influence our life. Are you curious? I am, always. My 5 minutes alone in the toilet. My sleepy, limbo state in the early mornings between the first and the third cup of coffee. Mobile in my hands, even too lazy to check my messages and emails. Well, Tinder would work for killing some time. How’s using Tinder in Bangkok? I have more than 300 matches and only ever went out with one girl. She was very hot in her pictures. She was very different from the pics, not interesting and had a very irritating voice in reality. I consequently quit Tinder for a while, and then got back on it occasionally, just randomly for 5 minutes at a time. My 5 minutes of solitary, in my drowsy limbo state sitting on the WC in the morning.

There’s this one who looks pretty in her picture, sunglasses and hair ruffled by the wind, with the background of a European city.

The description is written in good English. This one could work. Hi girl, you seem pretty interesting. Nice smile. What are you up to?

Again because of this, bye bye to Tinder for a while. A week or more passes by, I’m busy working on my first event in a famous club, it’s a blast. R. and I do a crazy set and the people are amazed, the international guest DJ then leads the people into other interlaced dimensions.

I sit on the WC and open up Tinder. I go through my new matches but nobody seems interesting: a couple of ladyboys, a girl with braces and one fake profile. That’s basically the essence of using Tinder in Bangkok. However, I scroll through my old matches and find her buried back there. P. has replied to my messages some time ago, but I didn’t’ see them. A smirk comes across my face, I have the perfect excuse for asking for her number: “I don’t use Tinder very often, you know it’s not my thing. Would you give me your number? I’d like to ask you something”. Then I start messaging her and I discover that she’s actually quite fun. I think that I should ask her out. I manage to do that in a nice way, and much to my surprise, she’s in. We’ll meet at 6 pm that same day.

I wear one of my favorite T-shirts, a white one with a photo of 3 nuns drinking beer and smoking, a pair of skinny blue jeans, my dr. Martins low boots and the unavoidable headphones in an enviable punky/kill the hipsters/homeless style. I start my café’ racer and head to the appointment. I feel very self-confident, and even a little smug. I notice that people are looking at me when I pass by. I pretend not to notice it and begin thinking about the appointment. I don’t feel nervous, and I don’t think that I’ll run out of words to say during my time with her.

She catches me from behind, introducing herself. She has a nice smile and a flowery dress. I’m a bit unfocused for the first few minutes, studying her, and I know that she can feel it. Then I smile, asking her something about her workday. She starts speaking happily about it and I now know what I can rely on in case I’m running short of subjects.

Traffic is very bad in Bangkok on Fridays, and this one is no exception. It’s very hard to keep the bike stable, zig-zagging between cars, not to make P. fall off. She’s wearing a skirt and sitting transverse behind me on my saddle, which is very small even for one person. She balances herself with her right hand on my shoulder and I feel the heat reaching my body from her hand. We stop in a bar for a drink and a talk. She is very beautiful when she laughs and I need to tell her. She’s pleased by my compliment, and I continue on this line. I love to stare into her eyes as she talks.

There’s something about her, I still can’t tell what, but I understand that she likes me.

The bar we are in towards the end of the night is packed. We are drunk but not extremely. A rock band is playing live. The drummer has a very dark tattoo on his right arm that goes from the shoulder to his hand, and another one on his pecks. His hair is dyed artificial blond mixed with the original black. He seems like he’s coming straight from a crossover band from the 90s. The crowd is almost completely Thai and very wild. I need a beer, I need to have a little time to myself, I’m not used to spending the whole night with a girl anymore. Some of my friends are there. I’ve been a good guy, now I want a little bit of only guy parenthesis. Girls are drunk and looking at us with naughty faces. I stop to say 2 words to two of them, then pass the ball to my mates: tonight I’m already busy.

The rain catches us like stupid rats in a cage. Also, I’d like to point out and clarify that rats are not stupid at all: they are even smarter that 80% of animals, being capable of executing third-grade relation thoughts. So, once again, common beliefs are fucking us up. Rats are widely considered revolting and disgusting, so people make up stories about them. The traditional beliefs will make us slaves, but rejecting all of them is a mistake too. Fuck, here it comes again, I feel like a rat in a cage.

We run a little further and stop in front of a 7-11 with a little porch where a small crowd is seeking refuge from the rain. We are all young and wet, with eyes looking at each other wet with a feverish lust for life.

There’s this song by The Libertines called Music when the Light Goes Out that suddenly comes to my mind, the lyrics are really sad, nonetheless, they melt perfectly with the melody of the song that is cheerful and catchy. Pretty similar to using Tinder in Bangkok, I think. So I lose myself in the flow of extreme emotions, which if you think about it, are really what make our life worth living. And I feel overwhelmed by perceptions, I can’t focus my attention anymore and I’m lost among the European Romanticism of the situation, the Youthful Freedom, some Minimal Techno, several Literary Ambitions and no, I’ll never say no never again.

The rain pours almost as abundant as my thoughts, I want a damn cigarette because I feel the aesthetic imposition of it made by the situation and I obey, diligent as a little soldier. I look at P., straight into her eyes; I see the curiosity in them. “Let’s take a room here, I’ll take you home tomorrow. It’s not going to stop raining tonight”.

The girl doesn’t look too surprised, and in that moment I know she already had the same idea. I can’t help exhibiting a satisfied smirk that she promptly catches. An ending fitting for a start. We climb the stairs reaching the fourth floor, then turn left into the little corridor until we find the door to our room on the right.

It smells like the room has been closed forever, but there is a fridge with some beers that will sort this out. I open the first can and look at P., all wet, young, tanned and sexy, she tells me she wants to take a shower. She tells me that I can sleep if I wanted to, and I sneer loudly before calming down again.

“Ehhm, thanks for the polite proposal, but I don’t think I can sleep at the moment”. She smiles and gets in the shower closing the bathroom door. Then my sudden realization, “Fuck. Shit. Crap, I don’t have condoms!”.

I skull my beer and decide to go back to the 7-11 to get some, so I take the keys and sneak out of the room. Under the rain again, unnoticed by the world around, dancing to my imaginary melodies.

Once there I then decide to have a little coffee, a chocolate snack, and exchange a couple of words with a random balding German guy, just to go back to the room and find that she’s still showering. Ok, whatever I think, and open another beer. She comes out only wearing a little towel, and I have to force myself not to look at her. Don’t jump on her dude, don’t. Hold on. Just take a shower, and show her you can behave. Good boy, pat pat. So I run in the bathroom with the beer to take this damn shower, because I’m going to use this fucking room for the whole night for a very enjoyable session of great sex with that nice woman out there. So I wash everything accurately and all wet and perfumed, go back into the room.

Then I sit very close to her, staring into her eyes, smiling confidently. She asks me if I like reading, but I kiss her, just to let her go after 10 sec, still smiling and staring at her.

“You surprised me a lot tonight…”

“Oh that’s nice of you, people usually call me inadequate”

Surprised again, I lift her against the wall biting her lips as she feels my body still wet with all the hot blood pumping through it, she narrows her eyes and well, a lot of things happened after that. And then they happen again. And again. Because the room was already paid for. Because the rain outside didn’t stop until morning. Because coffee doesn’t make me sleep and I just had one at the 7-11.

Love at the time of 7-11 and Tinder in Bangkok.